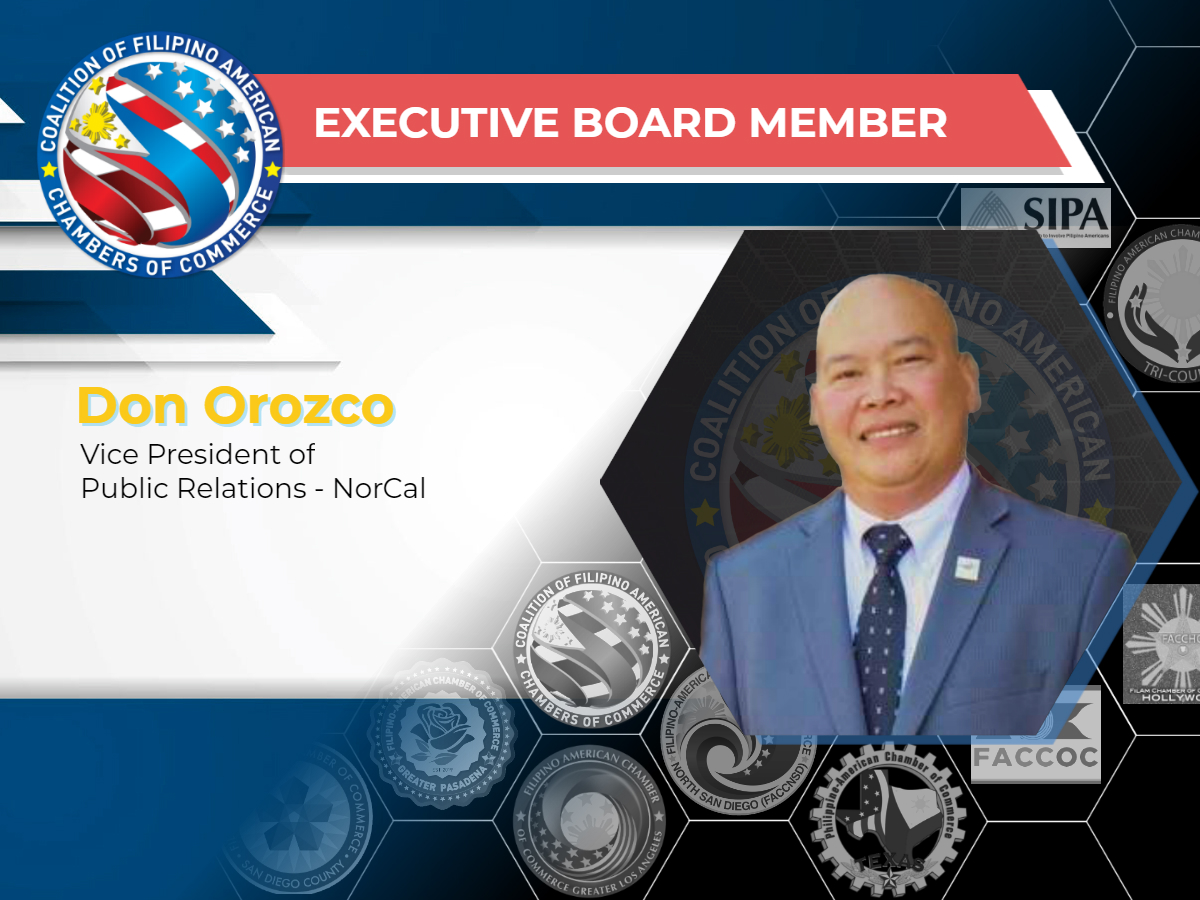 Mr. Don Orozco is a seasoned professional of the banking industry with over 20 of experience spanning both the Philippines and the United States. Upon graduating from the Philippine School of Business Administration with a Bachelor of Science degree in Business Administration in 1984, he immediately began his career in banking at the Philippine Commercial International Bank in Manila, for which he worked for over 12 years, eventually earning the title of Marketing Relationship Manager. He moved on from PCI Bank to become a Branch Manager of the RCBC Savings Bank in Manila. Prior to immigrating to the US, Don held the position as the Administrative Assistant to the Chairman at the Export Industry Bank in Manila.

Upon immigrating to the US, Don held several positions including the continuation of his bank career at Wells Fargo Bank as a Business Champion and Personal Banker. He shifted into a career in sales in 2014 becoming a Sales Cluster Head for Santa Clara and San Mateo County at PLDT. After a year in that position, Don took on the role of Pre-Planning Advisor (Licensed Life Insurance Agent) at Dignity Memorial, a position that he still occupies today.
Outside of his professional activities, Don has been very active in his community work. He is a former BOD and PRO of the Filipino American Chamber of Commerce of Silicon Valley. He has also served as the PRO for the Filipino Community Center of Santa Clara County. Don has also served on the Board of Directors for the Milpitas Gateway Silicon Valley Lion’s Club and Avenue One Community. He was also a member of the Global Filipino Network and the Bayanihan FilAm Foundation, Inc.

In these roles in the community, Don has had the distinction of leading a delegation of Nurses from the PNA-NorCal to a medical mission in Tacloban, Philippines. He also brought Sheriff Laurie Smith of Santa Clara County to meet with PNP Chief Marquez. He also recruited several FilAm organization to join the Philippine Consulate General in San Francisco.

Don’s hobbies and other interest include serving as the US News Correspondent for the Philippine TV Station Net 25, reporting the news and events involving Filipino American Community in the Bay Area. Don is also a Contributing Writer/Ads Specialist for FilAm Star and the Philippine News newspaper. His also works as the TV Ancho for the Filipino American Chamber of Commerce of Silicon Valley Network, where he interviews and features newsmakers and business owners of the Bay Area. Don is also a licensed Notary Public for the State of California.