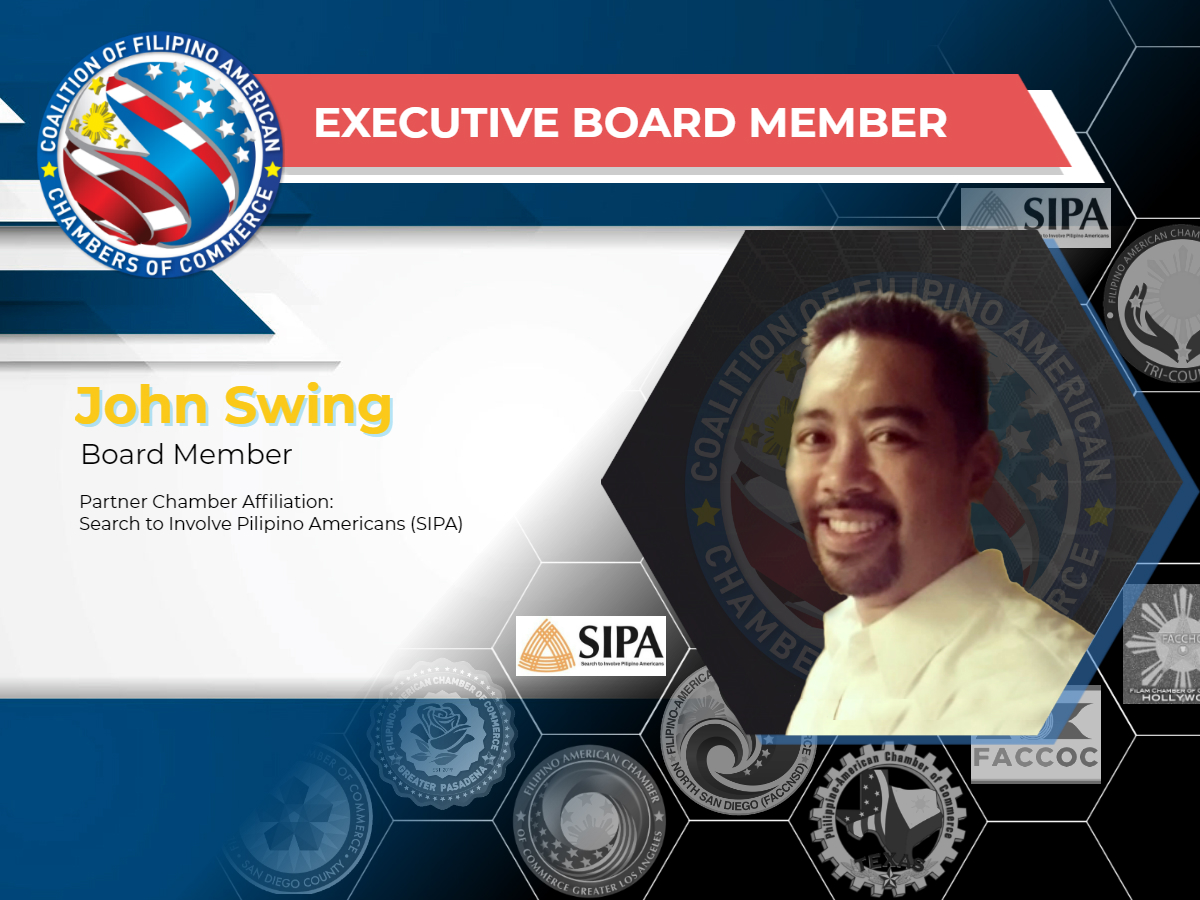 John is a civic leader in Historic Filipinotown. He is currently the Community Economic Development Program Manager at Search to Involve Pilipino Americans (SIPA) from 2015-2017 then returned in late 2018. Prior, he served as the Assistant Executive Director at the Filipino American Services Group, Inc. (FASGI) from 2017-2018. He was responsible for the fund development and operational management of the organization. The common responsibility within these organizations is that he provided counseling, technical assistance, business planning, workshops, and marketing/ communication resources for clients.

He is a principal consultant at Swing Associates, Inc. that provides communication tools, fundraising and development strategies for his clients. He is responsible for the writing and management of grants, marketing campaigns utilizing social media platforms, managing volunteers and organizing community outreach events. His expertise in development is proposal writing, research, budgeting, grant reviewing and fund management. Through his work, he became an event consultant for the AsianWeek Foundation’s San Francisco’s Asian Heritage Street Celebration (2010), steering committee member of the Hep B Free San Diego Campaign (2011), co-founder of the Hepatitis Free San Diego Project (2011), and a Board Director of Riverside County’s Foundation on Aging (2012-2014). One of his most successful accomplishments in content writing was authoring a proposal for the Hepatitis Free San Diego Project (2011) and being awarded by the Center of Disease Prevention and Control (CDC). His work was later published in several medical journals.

He has also managed over 5,000 volunteers in healthcare events, cultural festivals (such as the Business Director for the Festival of Philippine Arts & Culture – FPAC 24, 25, and 26), and charity fundraisers. From 2012-2014, he created business development plans on sustainability for his clients in Costa Rica, Panama, and Colombia and moderated health conferences in the Philippines and Viet Nam. In 2014, he completed work with the Imperial Irrigation District (IID) as a Grant Reviewer and continues to serve the US Department of Health and Human Services, Human Resources and Services Administration as a Peer Reviewer (2011-present). In 2015, prior to his work with SIPA, he completed a six month assignment on a development project with international schools in Costa Rica.

Along with his military service in the United States Marine Corps (1995-2001), he served in the public sector field for over nine years (2001-2010) serving as a Riverside County Probation Department facilitator of legal, education, and family oriented programs in which he authored program development policies and procedures. He is very knowledgeable with the dynamics of programming development and has assisted many people in securing educational and career opportunities.

He has extensive experience in operational management through his assignment as a Duty Officer at one of Riverside County’s treatment facilities. He also held positions as a department interviewer, trainer of new staff, team leader of the Employee Fundraising Campaign, and being a member of the Probation Department’s strategic planning committee.